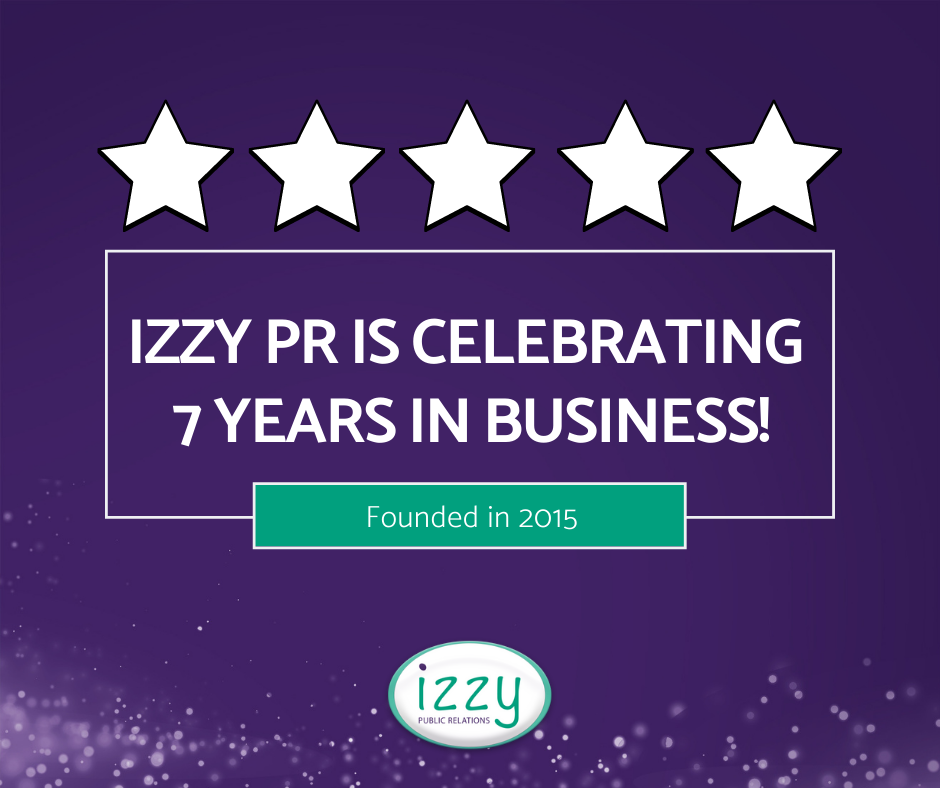 How has seven years gone so fast?
Izzy PR has grown steadily from supporting small businesses on very small accounts, to working with multi-million pound businesses with larger budgets and needs.

Izzy PR was founded in early 2015 by Sarah Hawes and like all businesses when they start, there was a story to their beginnings.
And Izzy PR is all about the storytelling, so get comfy – here’s the history.

The beginnings of Izzy PR
January 2015: Sarah was looking at the year ahead and in September, would be seeing her daughter go to primary school. She was working 3 days a week in a contract job and decided to set up as a freelancer offering PR, marketing, copywriting and social media to fill the other two.
By this time, she’d been in journalism for 15 years and Communications / PR for the last seven of those, so had enough skills to be able to offer help to a small number of clients.
She’d wanted to call the business Bella PR, using her daughter’s name, but the domain names were already taken by a large New York PR agency, so Izzy PR was the option instead. Still using the name but in a different way!

The first client
Networking can be daunting for any new business. Sarah didn’t even know it went on until she started out on her own…this whole new world of business meet-ups, breakfasts, lunches and twilights had all been going in this secret world whilst she was working the 9-5 in the contract jobs.
And so, one Wednesday morning in February 2015, she set off to her first networking meet-up at The Base in Northfleet.
She was terrified. Sat in the car for 10 minutes before she went in. Felt like an actress about to go on stage and couldn’t remember her lines. Imposter syndrome was taking hold – what was she doing here? Why would people want her to help them and why on earth would they pay for it?
“Let’s offer to do it all for free to show people I’m OK at it!”

But she made it in, saw someone from her old newspaper days then started to calm down.
As she got up to leave, a woman came in hassled and in a whirlwind, full of apology for being so late.
Her shoe had broken on the way there, so she had nipped to get it fixed and missed practically the whole event. As Sarah went to leave, the woman very quickly asked who Sarah was and what she did. As confidently as she could (whilst not feeling it at all!), Sarah said ‘PR & marketing’.
The reply was unexpected: ‘Oh good, I need you – here’s my card. Can you give me a ring and help me?’
That was Izzy PR’s very first client – and we’re still working with each other today!
This client referred Sarah to another and that one to another – and in just a couple of months, she had around six clients to fill her two ‘spare days’ – but those spare days weren’t happening until September…in the meantime, they were spent with her three-year-old who would turn four in June before going to school in September!
The workload was managed in the evenings until September, when it moved to the two free days and Izzy PR took off from there.

From part-time to full-time
For the first few years, Sarah worked two days a week on Izzy PR work and three days a week on contract jobs, moving through various organisations including charities, BBC Radio Kent and a number of maternity contracts for old colleagues, before ditching the day job and taking the leap of faith.
A particularly nasty spell and a slide down some very dark mental health rabbit holes at the hands of the last contract job was the final nail in the coffin. Being an employee working under under-qualified and at times incompetent micro-managers had taken its toll and with the Izzy PR work more than filling the two days, she decided to leave and go solo.
The leap of faith was in full swing!

How Izzy PR grew
Once Izzy PR was full time, it was time to take it up a level! Working on a few clients across two days was very different to finding enough clients and client work to cover five!
And don’t even talk about the number of hats you need to wear as a sole trader!

The list went on and what all freelancers think when they set up is:
I’ve got 7 hours a day to work.
I’ll work all of them – all 35.
I’ll charge for all of them – yippee!
I’ll be rich – yay!

And then…you realise that the invoicing, networking, talking to new clients, building relationships and everything else that you don’t allocate to client accounts has to be done – and cuts in massively to those 35 hours!

Outsourcing
And that’s where Izzy’s outsourcing began, with a Virtual PA…who started by taking a few jobs from Sarah’s plate but very quickly became intwined as the backbone of the business; organising, streamlining, setting up processes and looking through Sarah’s workload (which was of course now meticulously recorded on software) to see what else could be cleared from her task list to ensure the maximum opportunity for paid client time.

Next was adding services to the offering, to turn Izzy PR from a copywriting, PR & marketing business to a full service agency, able to offer everything clients might need, from websites, to graphics, to artwork, advertising, events, photography, filming, print and media training.
By working collaboratively with other high quality and diligent freelancers, Izzy PR was able to take on more work, across a wider scope and steadily grow.

A new website, more focused networking, strategic collaborations, speaker slots, workshops, webinars and a frequent presence on LinkedIn have all helped to raise Izzy PR’s profile, attract clients and turn it from a second job to a busy, flourishing agency.

The future
2022 is another year of growth, with lots of work already confirmed, new clients booked in every week, proposals out with clients an on-boarding calls booked well into March.

It’s sometimes been a hard slog but it’s always been better than working for someone else!

We’re excited to be working with Brogdale Collections
March 9, 2022