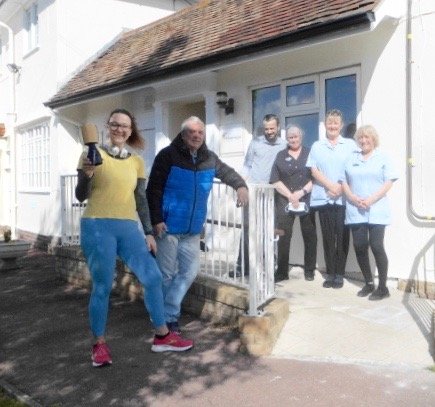 Care home staff in Folkestone took part in a sponsored trip – to raise money for elderly people affected by the war in Ukraine.

A group of three staff left Pelham House Care Home and made their way to the Hythe Imperial Hotel, five miles away.

It was organised by 68-year-old Roberta ‘Bobbie’ Harrold, who puts on the activities at the care home, and she was joined by local artist, 75-year-old Ken Morley who helps residents with craft work.

They were waved off from Pelham House by colleagues at around 11:30am and together they walked, chatting with people, stopping to admire a bikers’ meet and enjoying a burger on the beach too before returning back at 2:30pm.
Admin assistant Gabriella Van Beek from Pelham’s sister company Aspire Home Care, joined them and ran there and back.

Sponsorship came from residents, their families, colleagues, friends, family and well-wishers along the way, plus donations online onto Bobbie’s Just Giving page.
Around £170 has been raised so far with more donations pledged.

Bobbie said: “We decided to do the walk after hearing about a 90-year-old who was stuck in her bed after her apartment block in Mariupol was attacked. She was rescued by neighbours and looked after in a bunker for several days, while her daughter was treated in hospital, who later joined her.
“We wanted to do something to support the elderly there and the money raised will be sent to Age International, the sister organisation to Help the Aged, who are supporting the elderly in Ukraine.

Website spelling errors – software built by developer after finding nothing on the market to spell check his new website
June 15, 2022